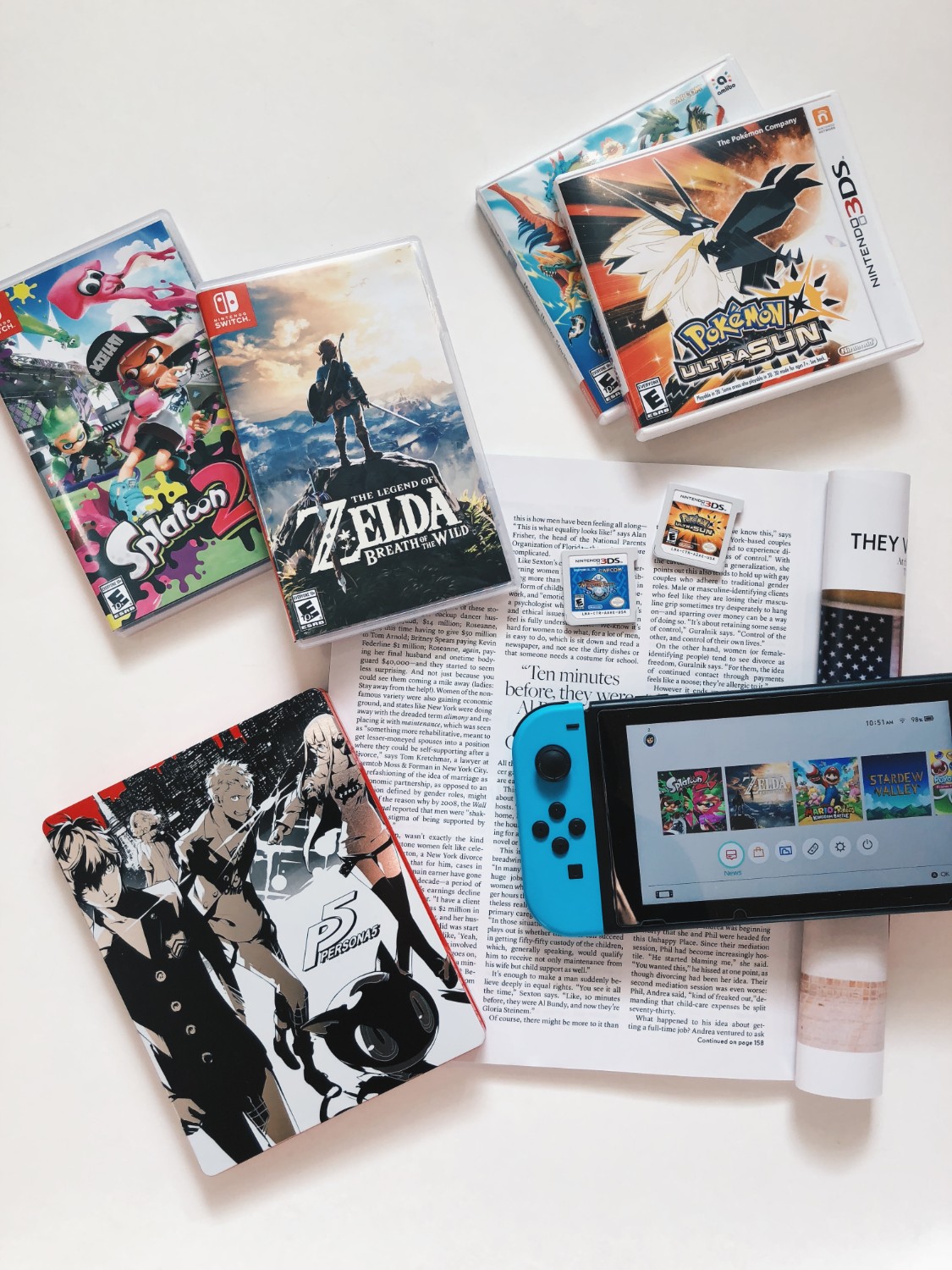 By day, I may be a professional writer and editor, but by night, I am a shameless gamer. Video games have been a huge part of my life since the days of GameBoy Color and Playstation 1, and my love for games has only grown since. 2017 was a golden year for video games and Nintendo, in particular. I was so hyped to get my hands on a Nintendo Switch back in March and I still remember how loud I screamed after watching the Nintendo Switch premiere trailer back in October of 2016. Now, here are the games I enjoyed the most this year.

PS. Don’t worry; no spoilers are ahead!

The Nintendo 3DS may be on its way out with the arrival of the Nintendo Switch, but Pokémon Ultra Sun and Ultra Moon made a lot of people dust off their 3DS this past November. I still frequently play my 3DS (thanks to Animal Crossing: New Leaf) and Ultra Sun was a welcome addition to my usual routine. I enjoyed the vanilla Sun version so much last year, but Ultra Sun I enjoyed even more. However, I was upset that they took out one of my favorite plotlines in the Pokémon series ever. Adding an additional 100 Pokémon to the national dex really made my return to Alola feel fresh and I enjoyed all the extra side quests they put in. With this game, I was more than happy to surrender to all the nostalgia and fanfare. And, of course, I was glad to kick Giovanni’s butt again after all these years.

Okay, I admit it: I never played a Monster Hunter game before. I’ve seen my brother play them but they always looked so intimidating and gritty; plus, I heard the grind was almost a chore. However, Monster Hunter Stories was created with a younger audience in mind. It’s much more “anime” than the rest of the series, the monsters are almost in chibi form, and the main characters are children. And that’s what won me over! This much “cuter” angle of the story got me interested, especially since, in this game, the object is to collect monsters instead of hunt them (although there are hunting quests, of course). I had fun filling up my monster dex, searching for rare eggs, and riding on the back of my favorite beast: the fabulous pink Rathian.

If you told me a few years ago that I would love a shooter-style game someday, I would not have believed you. And if you told me I would love a shooter where the characters were half squid, half kid and the weapons were paint guns and giant paint brushes, I would have laughed in your face. However, here we are, and I am in love with Splatoon 2. The things that intimidated me the most about traditional shooters are all absent from Nintendo’s take on the genre. Instead of “kills,” the main game mode, Turf War, ranks you on how much you inked the map and helped your team. Instead of counting your “deaths,” it only counts your splats and how many times you used your special weapon. It’s very friendly to pick up, and its vibrant, quick matches make this game so addicting. Plus, customizing your character with the freshest gear and tailoring your abilities to meet your playstyle is SO rewarding.

The Legend of Zelda: Breath of the Wild (Nintendo Switch)

Of course the official Game of the Year has a spot on my list! I haven’t played a proper Zelda game since The Legend of Zelda: Oracle of Seasons when I was like 10, so this game was a must-have for me. While the story was a bit weak in my opinion (which personally kept me from choosing this as my own Game of the Year), the journey this game takes you on is so enjoyable. In the beginning, I felt overwhelmed at the possibilities. There were so many places you could go, so many side quests and mysteries to solve, that I didn’t know where to start. I often got sidetracked when I spotted a korok on my way to a town or a shrine on my way up a mountain. However, that’s what made this game so much fun. Everything was something new to discover. I sunk over 150 hours into this game and I could see myself playing for a hundred more.

Tales of Berseria (PS4, not pictured)

One game that really made my year was Tales of Berseria. I was pleased that the main character of this beloved series was finally a girl, and all the other characters surprised me as well. I loved that the main character, Velvet, was only out for revenge instead of the traditional “saving the world so I can be a hero” motivation of most JRPGs. Furthermore, I loved Magilou’s entire personality and character arc after totally misjudging her based on her wacky appearance. Finally, I adored Eizen, the handsome, cursed pirate who writes letters to his baby sister in private. All the characters were so wonderful to me that when I finally beat the game after 100 hours, I was so sad to leave them because they almost felt like my friends.

My choice for Game of the Year definitely goes to Persona 5. It was my first proper Persona game, though I’ve watched friends play Persona 4, and I was so invested in the game the whole way through. The traditional turn-based, dungeon-crawling JRPG elements were all there, but with Persona’s special flare. From the jazz soundtrack to the comic-book style dialogue boxes to the bad-ass hold ’em up scenes (has a character ever looked cooler pointing a gun?! I don’t think so), this game was just a visual masterpiece. The heavy plot and character development are what really won me over, as well as the social simulator aspect. It was tough choosing between hanging out with Makoto or going to the library to get my knowledge up, but that’s what made the game feel so personal. I literally felt like a student by day and a masked vigilante by night. Such satisfaction.

Animal Crossing: Pocket Camp (mobile)
As someone who has played every single Animal Crossing game since the series first came to America in 2002, I was more than excited for the mobile app. This game is everything I wanted it to be and more; I love checking in on my campsite every few hours, filling requests, and decorating my camper. Plus, it’s the best cure for my anxiety.

I Am Setsuna (Nintendo Switch)
I Am Setsuna is the first game I played on the Nintendo Switch and I enjoyed it very much. First, I absolutely adored the all-piano soundtrack so much that I would leave the game on in the background just to listen to the music. The characters were warm, the story traditional, and the graphics beautiful. This game made me almost love snow.

Fire Emblem Heroes (mobile)
Although I have never played a single Fire Emblem game in my life, I do enjoy a good tactical game every now and then, and Fire Emblem Heroes for mobile scratched that itch. Though I’m sure I would have enjoyed it more if I knew all the characters, it was fun to discover and collect new ones and build up a pretty tough army.